“The Tangled Wood” grew organically from plate to plate, the composition developing as it went along; disorderly like the Australian bush itself, strangely beautiful yet tense and uncomfortable.” – David Frazer 2019

My intention today was to limit this address by ‘speaking to the work’ and the work only. However, once I begun drafting these few words the task proved a little more difficult than I first imagined. The thing is, once you begin to unpack David Frazer’s work then the artist, his story and the work merge and in many ways become one and the same, even in those works that are divested of figurative content, the artist is always present.

So, when critics and writers examine David’s practice they will often frame their comments by citing the narrative content of the work and how this content, will at times, spill over into ‘autobiography’. It’s easy to see why, as narrative appears to be located at the heart of David’s practice. However, I do think there is a deeper reading to the work but this reading, although not elusive, is nevertheless much more difficult to articulate. For a start, there is poetry.  Once we accept that there is a poetic dimension, then it follows that this condition has the power to transcend both narrative and autobiography, that’s if, you permit it and, if you do, then one could say that the ‘meaning’ in David Frazer’s work lies in the experiencing.

The question is, is it possible to speak to the work and even more importantly, is it possible for the artist to do so? Take for example, the late American sculptor, Alexander Calder who, when being interviewed, once quipped:

“If it meant anything it would be easier to understand, but it would not be worthwhile.”

Reviewing Calder’s recent survey exhibitionat the National Gallery of Victoria, the Sydney art critic John McDonald proposed, “… that the work of art in this formulation is not a message, not a text or a story book, it is an education of the senses”.  Now, I’m perfectly aware that McDonald is addressing the abstractness of Calder’s work but he’s not talking about ‘pictures of nothing’.  If you saw this exhibition, you will be aware that there was also figurative representation, movement and in the circus works there was play. If you accept McDonald is correct and I do, then we can stretch his proposition to include the concept of – ‘thought in material’.

It is blindingly obvious that the work displayed here today is a technical tour de force but I do not believe that this technical prowess drives or defines David Frazer’s work.  What drives this work is that David Frazer has something important to say and he does so, not only as a poet but also as a writer of songs, albeit visual.

So, let us return to narrative for a moment, not in the obvious sense but in the condition I will term – the narrative of making. In printmaking the methodology of making will often prejudice the visual outcome of the work to the detriment of artistic and creative intent.  For the sake of argument let us seperate drawing in its speculative and purest sense, that is, drawing to discover or uncover and the dilemma is this and it is here that I concur with the late John Berger. When an artist stretches a canvas, twists an armature and in particular, transfers a design to a block or plate in printmaking – the artist has already begun to complete the work. Why? Because in normal circumstances, the outcome has already been decided. Not so with David Frazer, for I would suggest that David’s mastery of the medium is now second nature to him and this facility for making is channeled by his intuition to kindle a free pass that side steps this dilemma.

Where does David Frazer source his ideas? Well, permit me to cite Howard Jacobson, one of my favourite novelists when he wrote that, “The answer is – from the work. …….. Inspiration doesn’t precede the work, it finds itself in it”.

David has stated that, “ ‘The Tangled Wood’ grew organically from plate to plate, the composition developing as it went along; disorderly like the Australian bush itself, strangely beautiful yet tense and uncomfortable”.

When I first met David Frazer he was a post-graduate student at Monash University. During those years I really enjoyed dropping into his studio to see his latest work, having said that,  I also left myself open to interrogation.  David would pose many questions and I believe that these questions were generated by doubt, which, in the make up of a serious artist such as David Frazer, is never a negative but a demonstration of curiosity. We would speculate on the place of originality and how figurative narrative traditions in art could possibly continue to engage a contemporary world and in particular, a post modern world. Questions were also raised regarding the validity of conventional printmaking as a medium which at times has been relegated or perceived to be relegated, below the status of painting and sculpture. As I look around this exhibition, David Frazer has had the good fortune to answer his own questions and his response is there for all to see – it’s imbedded in his work.

As I deliberated upon these thoughts I was reminded of the comments made by the British potter and artist Greyson Perry when he presented the BBC’s 2013 Reith lectures titled, Playing to the Gallery. With great witticism, Perry discussed the limits of contemporary art including the dilemma of originality and on this point he cited the Helsinki Bus Station Theory. This theory was coined by the Finnish photographer, Arno Rafael Minkkinen.

I’ll give you the edited version but basically, the theory is this. You are an artist who has recently graduated from art school and metaphorically, you’re stuck in Helsinki. You are at the bus station and you need to go somewhere. There are a number of buses to choose from and each of the twenty or so buses depart along the same route before branching off to their particular destinations. You catch one. You travel for a few stops and get off. At that point you show your work to someone in the art world and they say it reminds them of so and so’s work. Upset and infuriated you return to the bus station and get on another bus. You travel on this next bus for a while and get off. Here you meet another ‘art critic’ who responds that although your work is interesting it continues to show the influence of another. So off you go, back to the bus station where you continue to continue.

According to the ‘Helsinki Bus Station’ theory, an artist’s career trajectory is like picking a bus. The metaphor suggests that the bus is your artistic style, and as you get off at each stop you meet different people who will compare your work to something which has gone before. This is the conundrum of originality and if taken to seriously the emerging artist is left in a no win situation. So, the moral of the story according to Minkkinen is this and I quote him here, “What you’ve got to do, is stay on the fucking bus.”

One of the things I admire about David is this – yes, his work may remind you of others but here’s the difference – this is his voice and he has made it his own. It is not only a powerful but also an eloquent and deeply personal one and its originality can be found in its poetry and its song – you see, David Frazer never got off the bus. 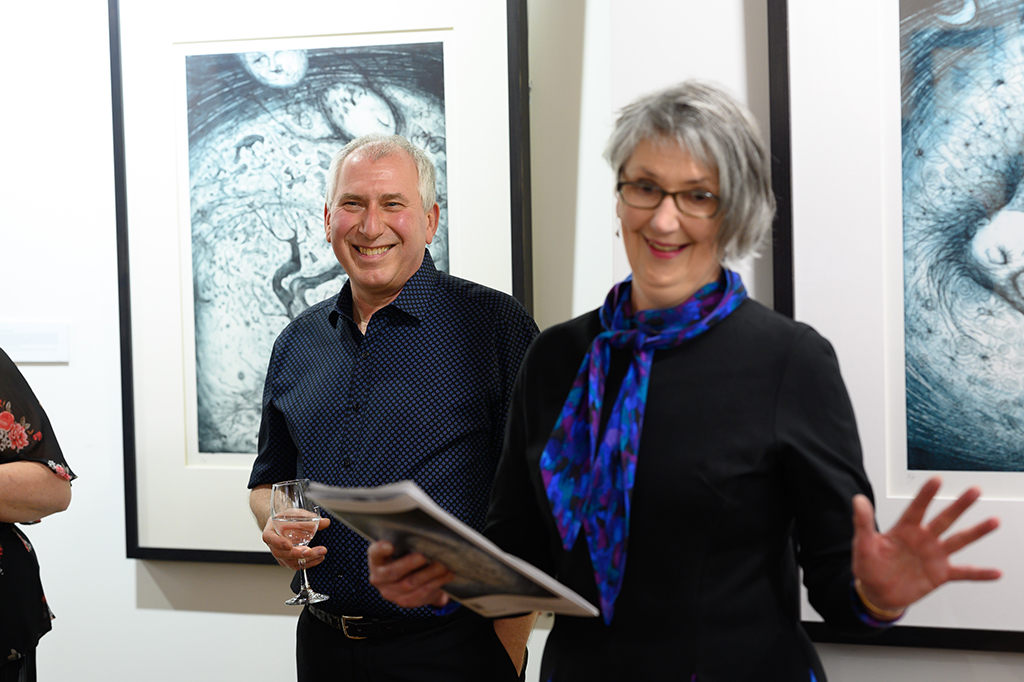 What does Jeff Gardner have in common with Lewis Carroll? 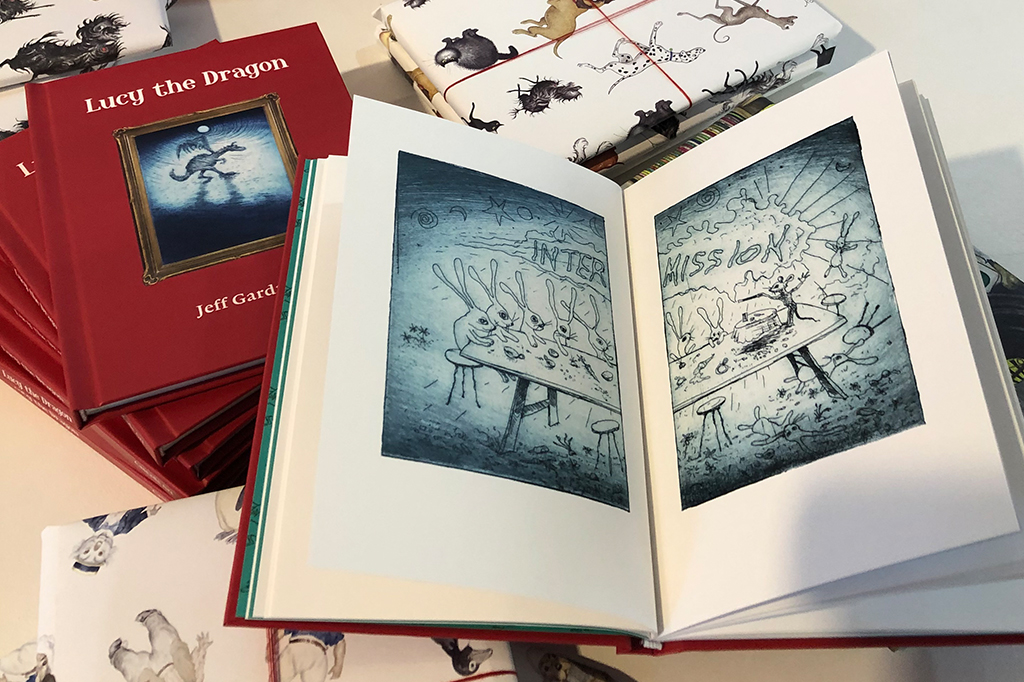 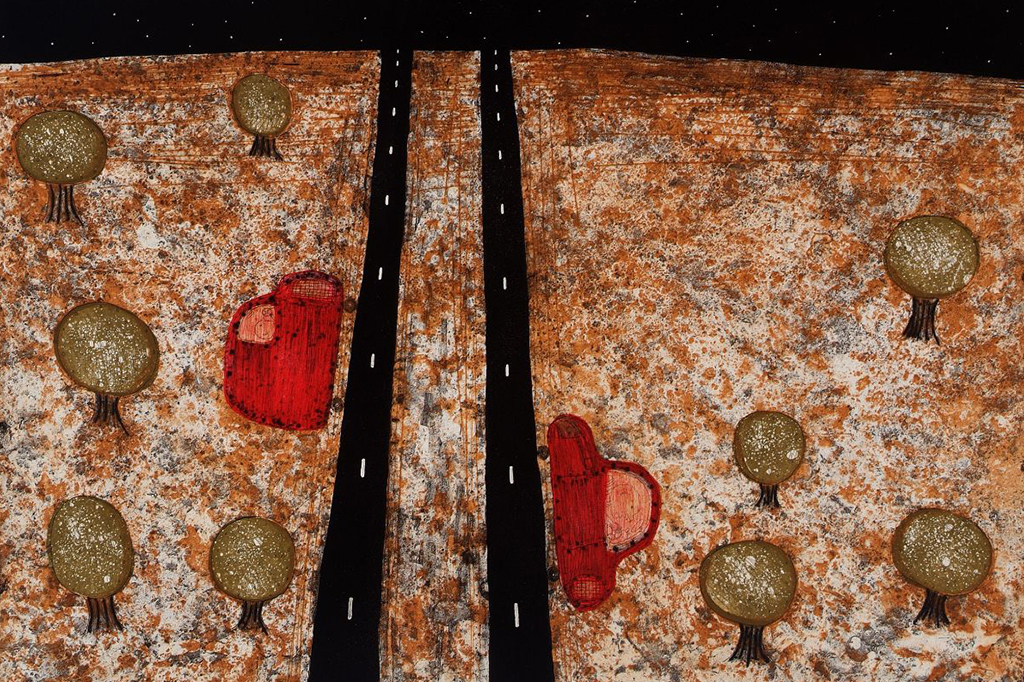 Blue Skies and Art…WE ARE OPEN! 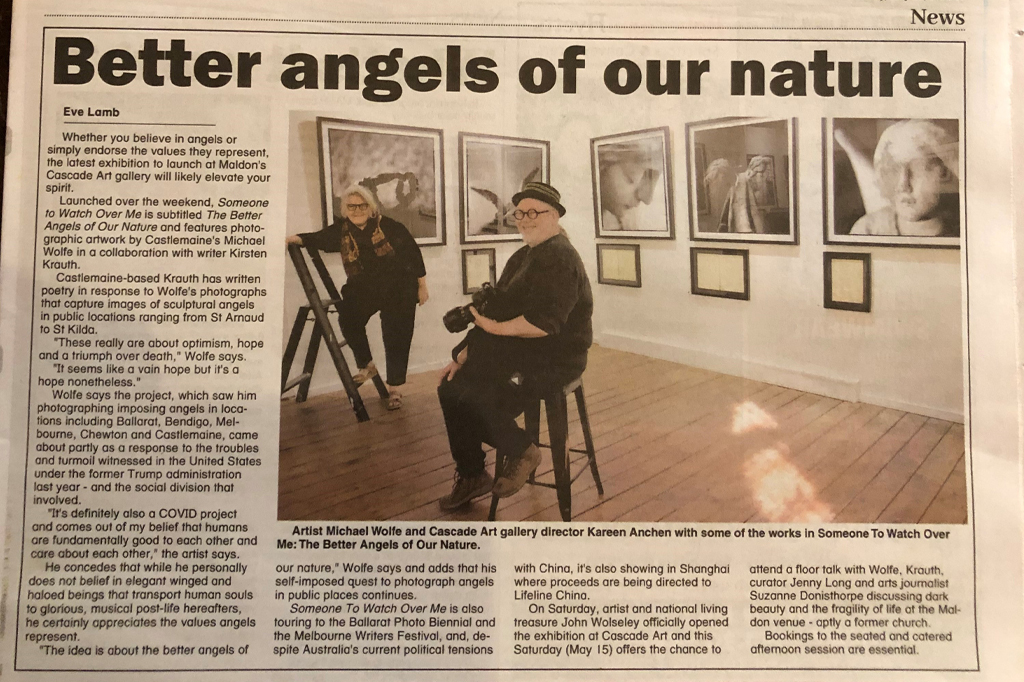 Full steam ahead in the Midland Express! 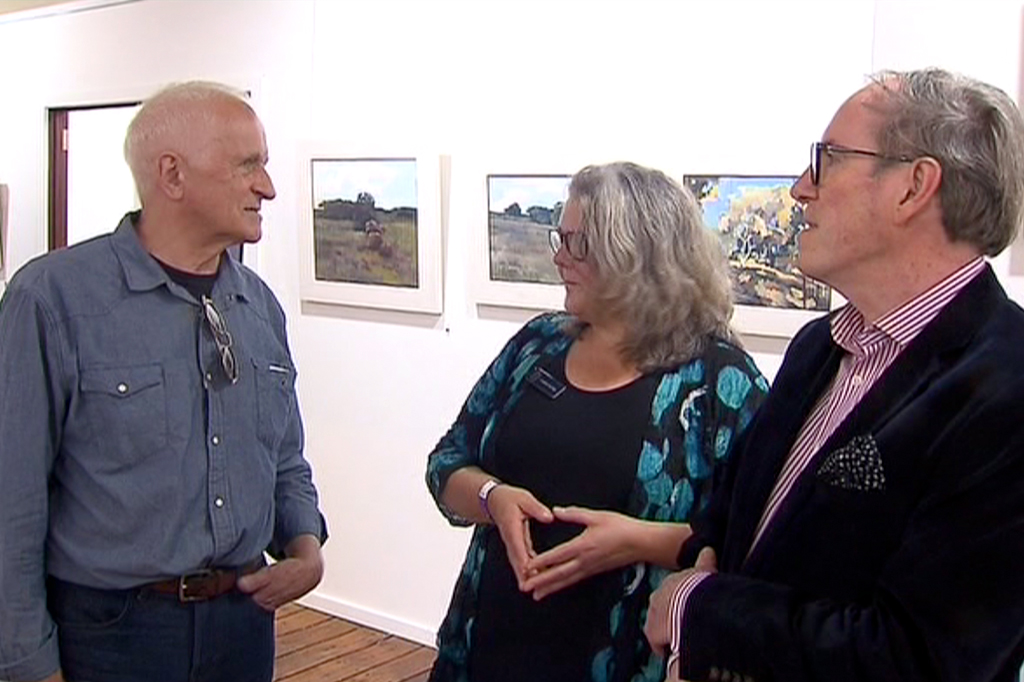 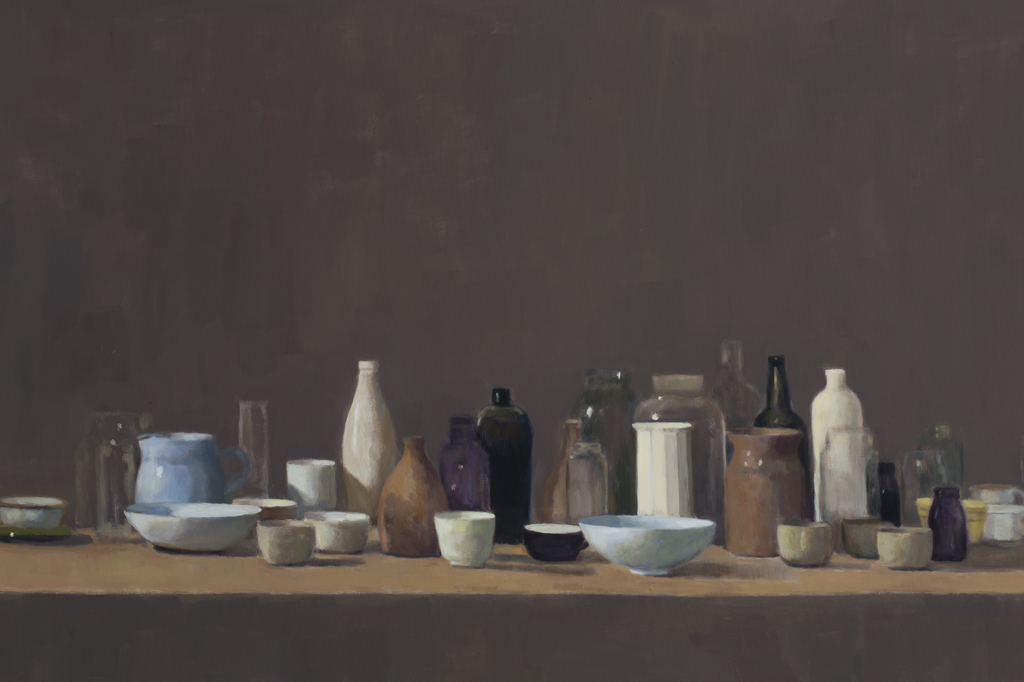 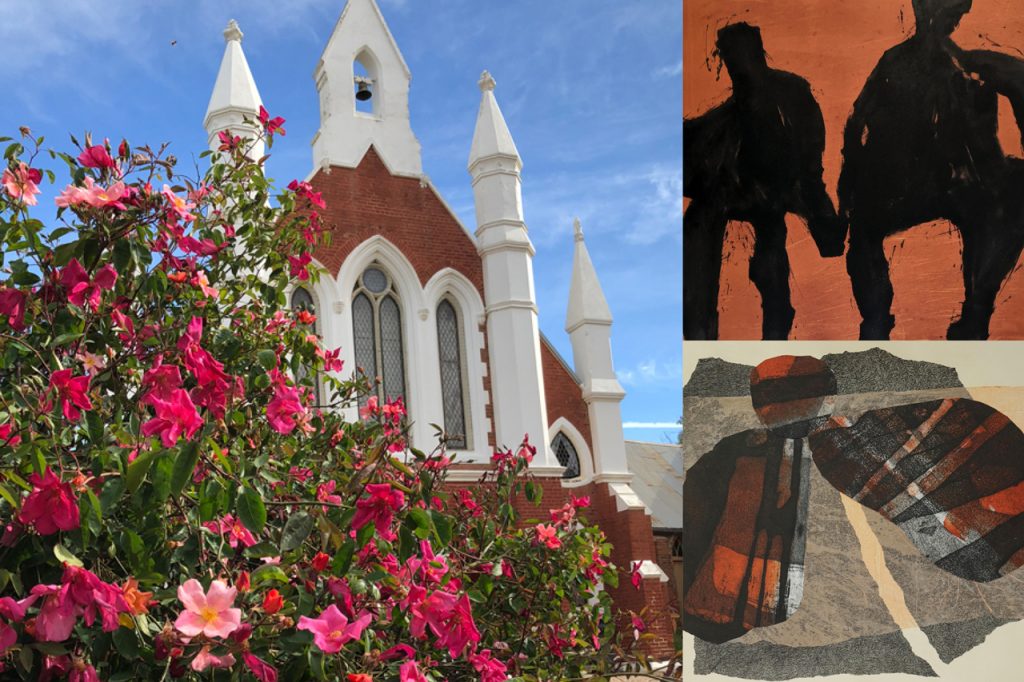 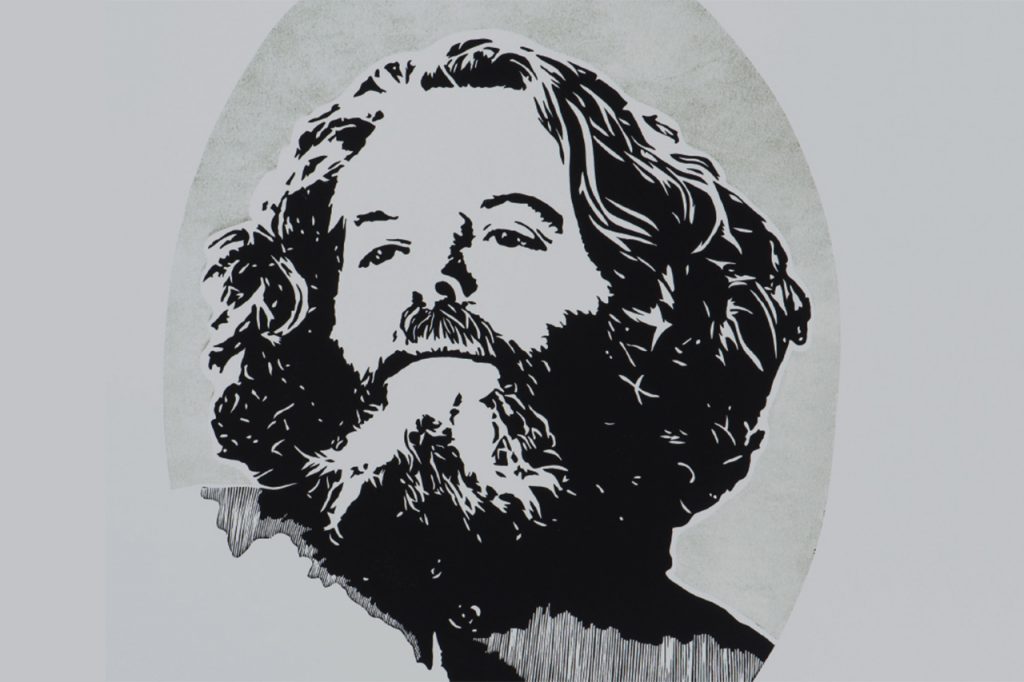 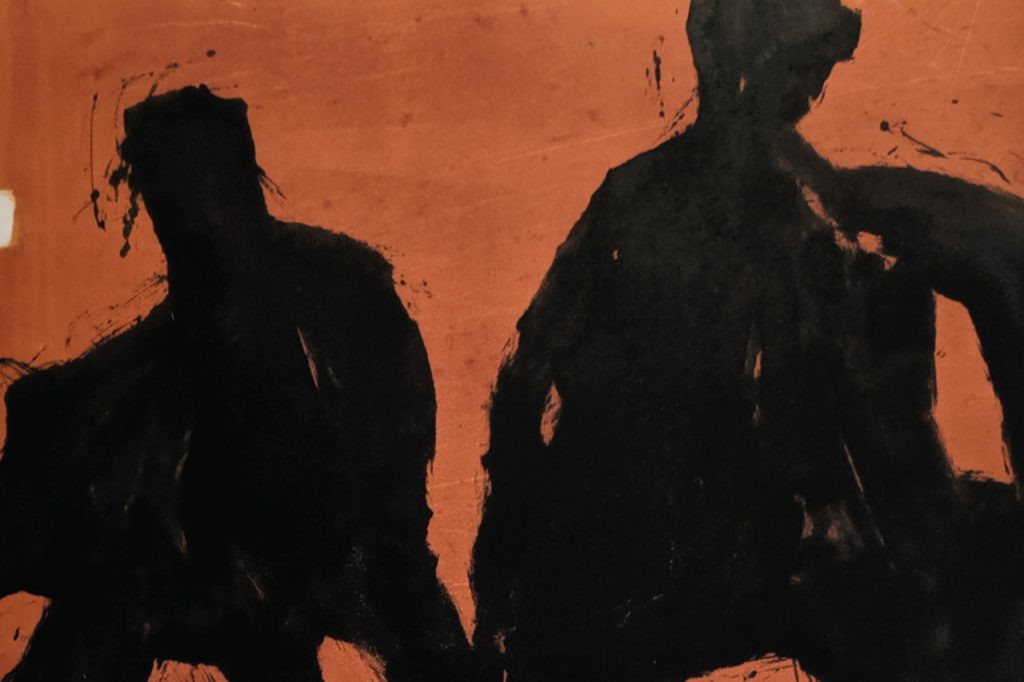 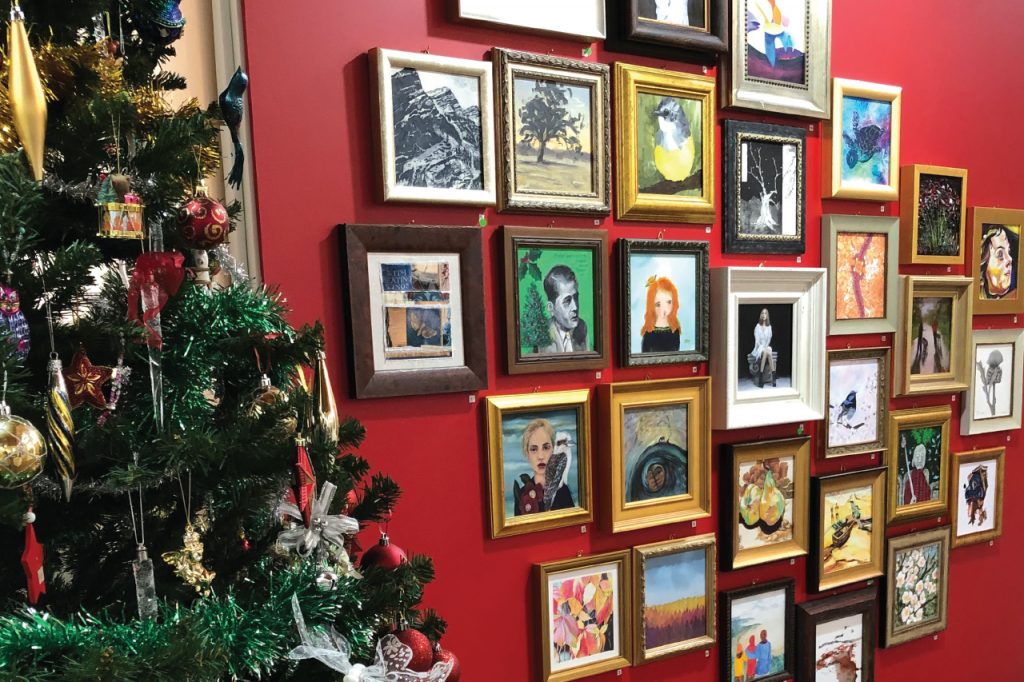 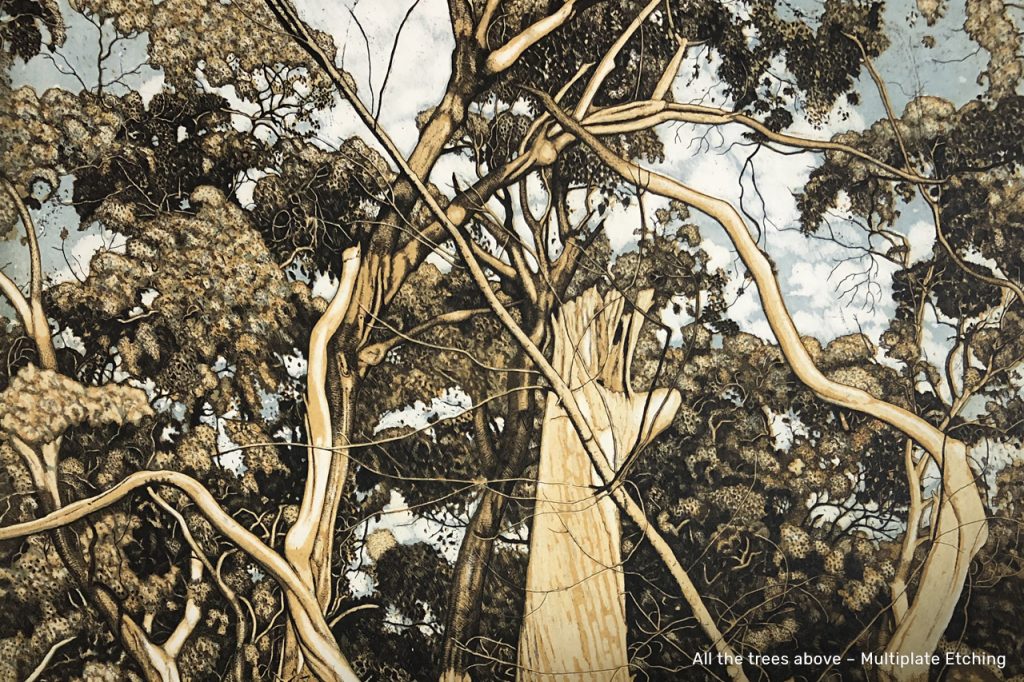 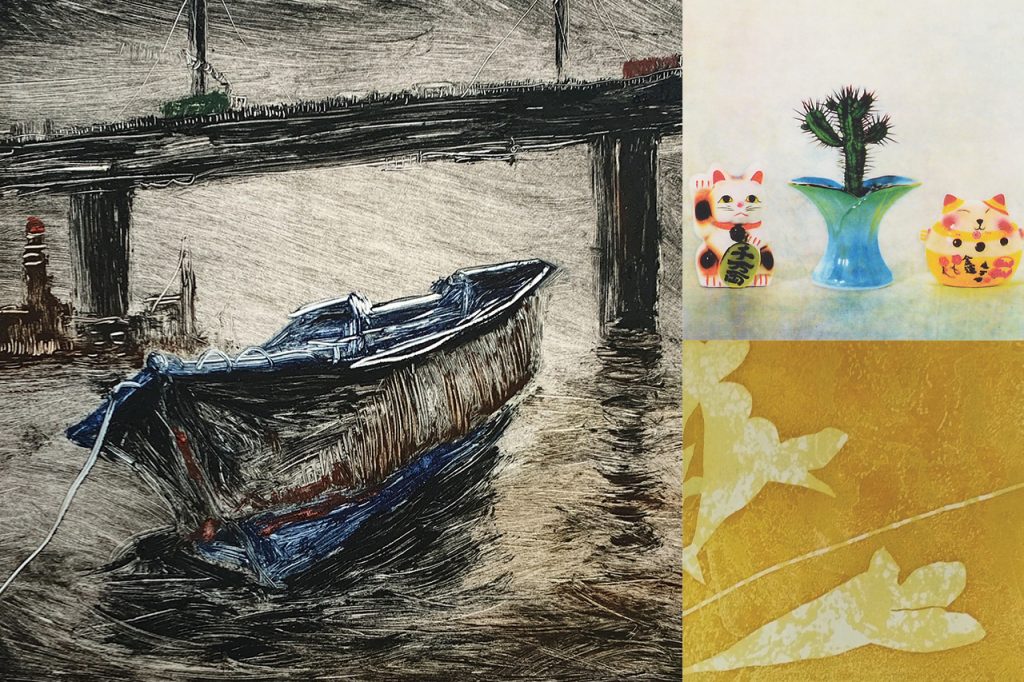 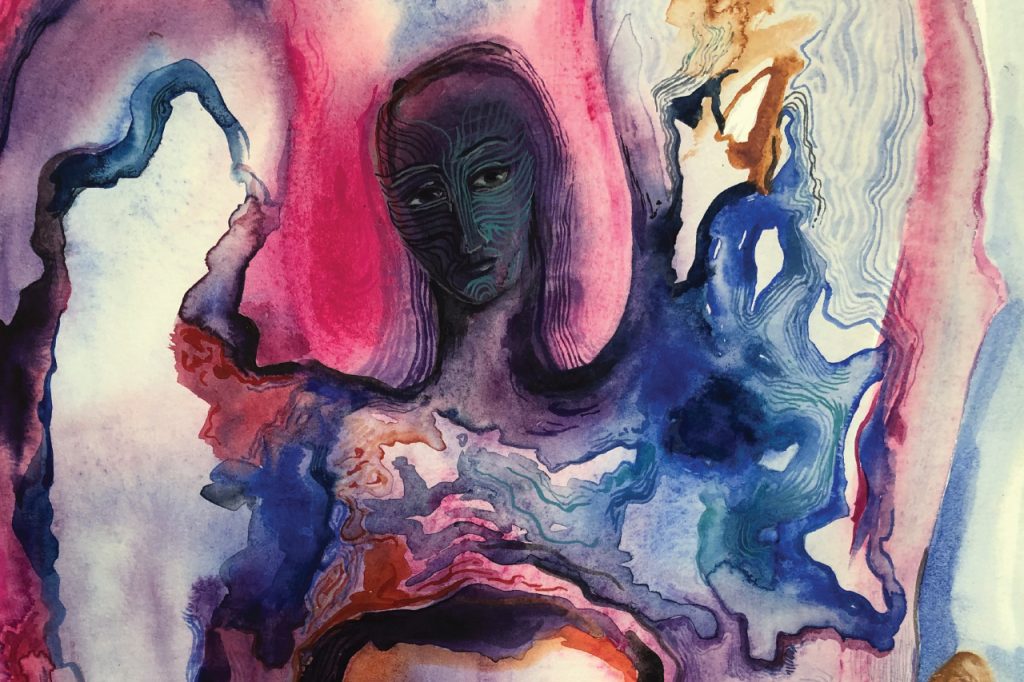 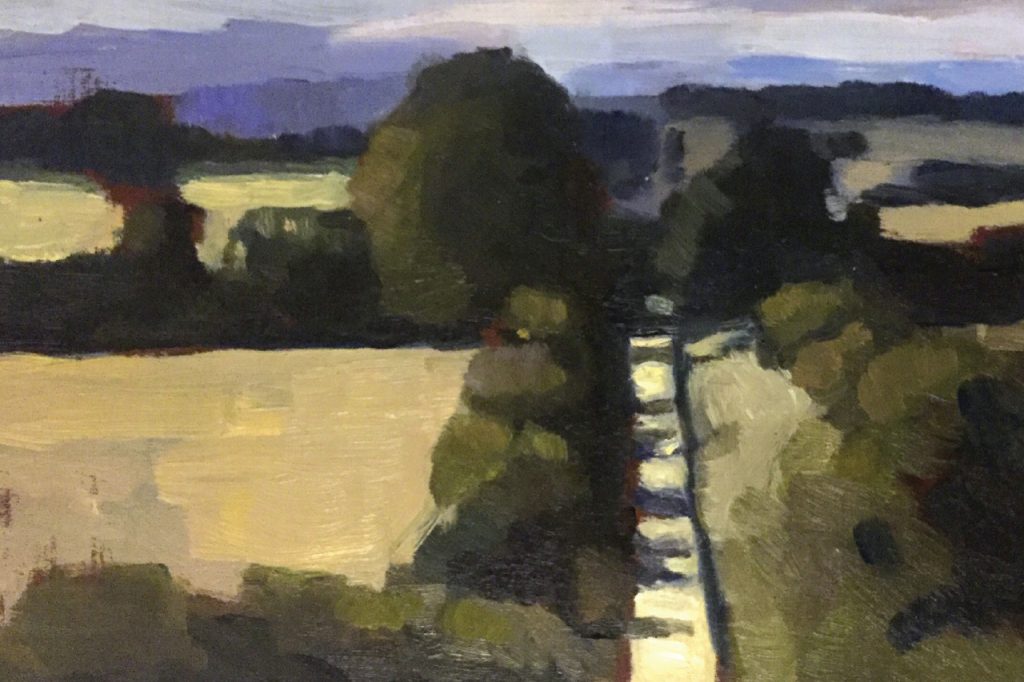 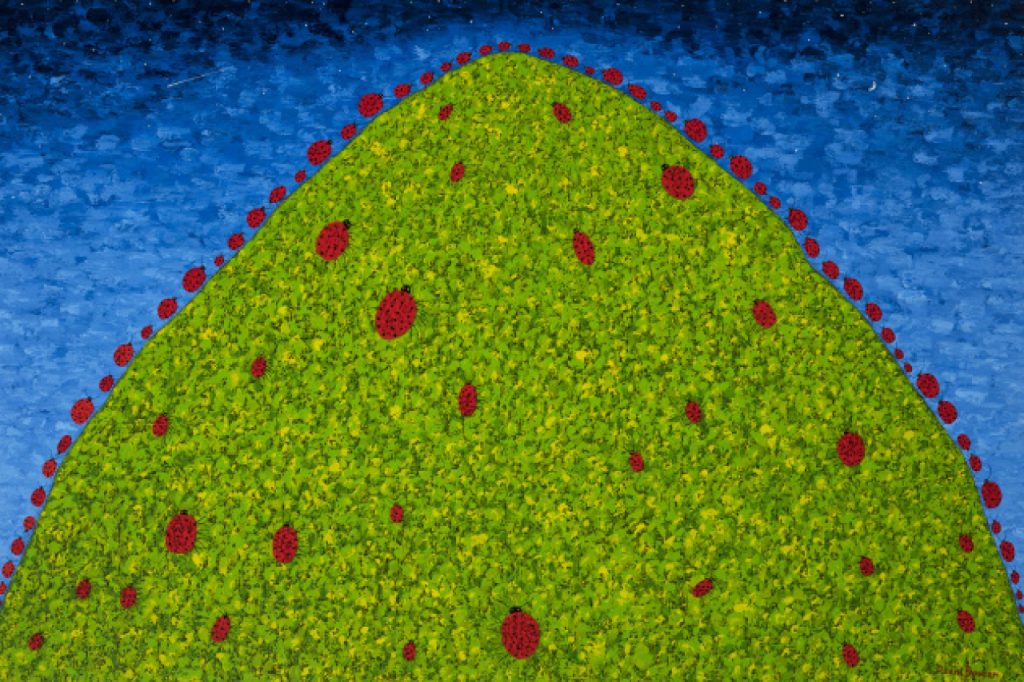 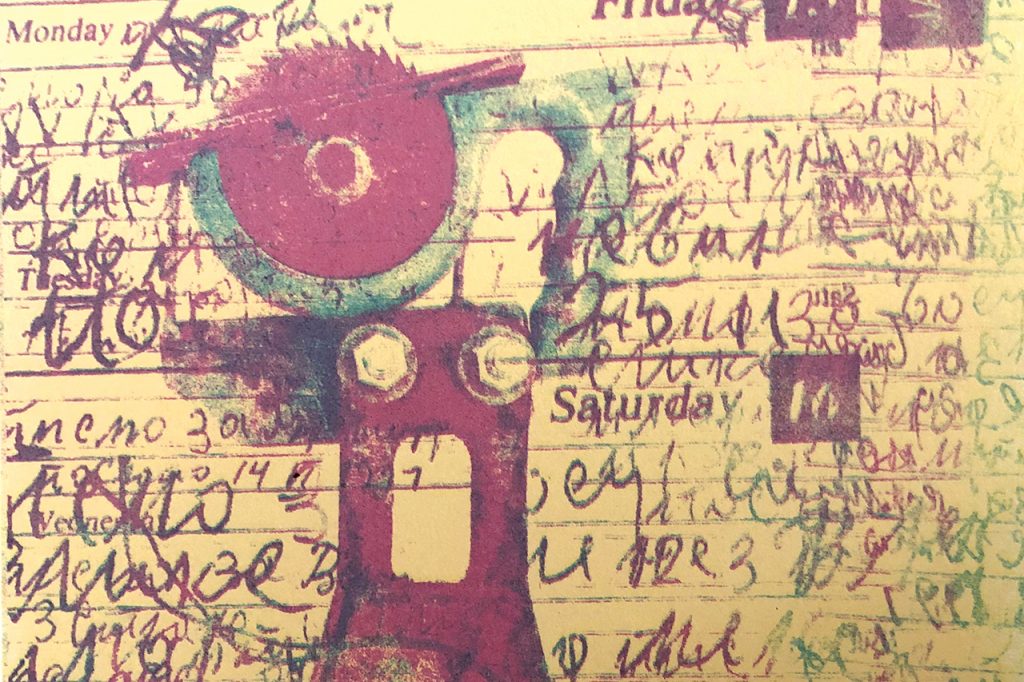 Drawing from the Line 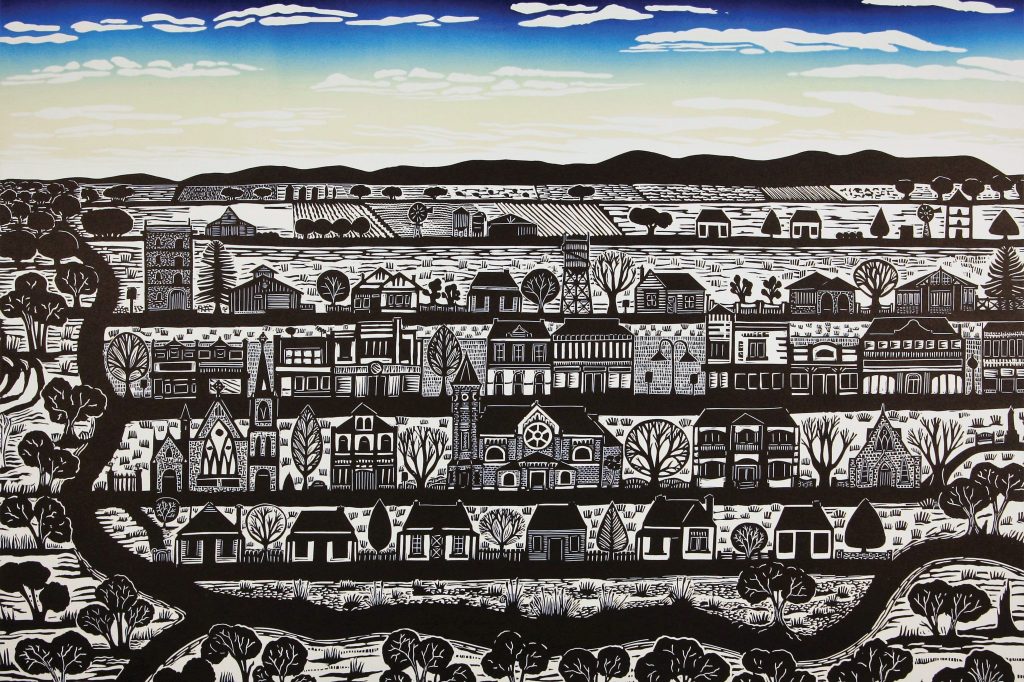 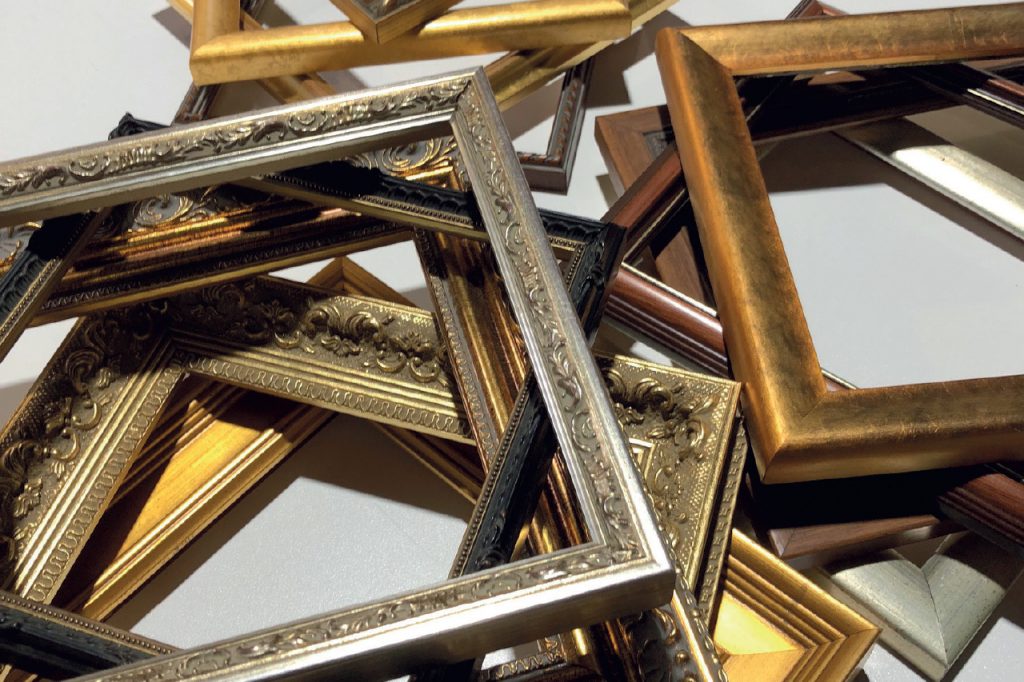 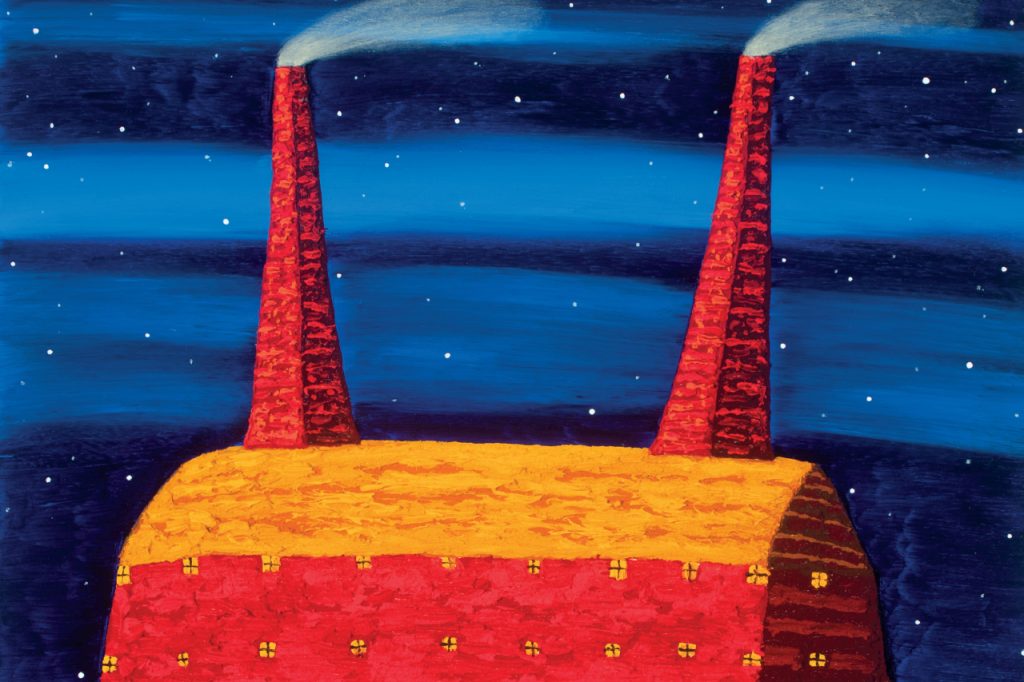